In 1989 planning permission was granted to the Tarmac company to operate a sand and gravel extraction quarry near to Fornham St Genevieve in Suffolk.

Much of the aggregate was used locally but notable projects included the A14 improvements and the runways at both Stansted Airport and Mildenhall Air Base. 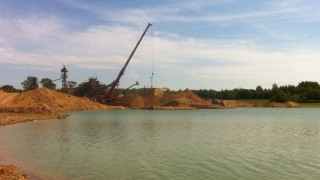 In 2015, with the sand and gravel quarrying complete, the site was sympathetically landscaped to include areas of arable farmland, rich grassland and a series of open water lakes in order to create an area fit for recreational, leisure and tourism facilities serving both the locality and the wider area.

Carp had been stocked into the lakes as far back as 2005, and it was decided that the Estate should become East Anglia’s premiere new carp fishing syndicate.

The lakes have played host to two different film shoots for the Chub Fishing brand, and can be seen in the following films.